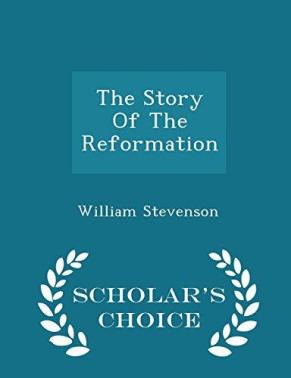 In light of the upcoming 500th Anniversary of the Reformation I decided to do some appropriate reading. Apart from listening through the Frank James III‘s wonderful History of Christianity lectures via RTS, the first book I picked up was William Stevenson’s classic work, The Story of the Reformation.

Stevenson offers a fairly standard presentation of the Reformation. He begins with the factors leading up to the period, laying the medieval and then Renaissance contexts: the skeptical spirit of scholars, the invention of printing, the slow vanishing of feudalism and the ensuing political disunity and nationalism, as well as the abuses in the Catholic church such as simony, nepotism, absenteeism, immorality and indulgences which gave rise to internal criticism throughout the church. These criticisms resulted in various minor and major reform movements which laid the groundwork for the Reformation such as the Conciliar movement, the Mystics (such as Thomas Kempis), John Wycliffe, John Hus, and Savonarola, and the Humanists (such as Erasmus).

With the background laid Stevenson traces the Reformation from its roots in Germany with Luther and his life, the Anabaptists, Calvin in Switzerland, and through to the Reformations in France, the Netherlands, England (with special focus on the Puritans), and finally to Scotland.

Some of these chapters are weaker than others – such as his accounts of the Reformation in France and the revolt in the Netherlands – but on the whole Stevenson offers a very enjoyable account of the unfolding of this period.

Stevenson ends with an analysis of the heritage of the Reformation. As he notes “the Protestant Reformation of the sixteenth century is the most vital and far-reaching event in all Christian history since the Gospel was first preached by Christ Himself and by His Apostles.” (p177)

The spheres of Reformation impact note by Stevenson are the economic and political, the social, and the religious. In the realm of economics and politics Stevenson notes that the Reformation resulted in a more economically progressive people and set the groundwork for the development of democracy. This was accomplished through such advances as the priesthood of all believers, the giving of voice to the laity, and especially the popular election of church officers where the people “naturally tended to apply to the state the methods they had found so effective in the administration of their churches.”(p180)

In the social realm Stevenson sees Luther’s translation of the Bible as setting the standard of modern German (similar to Calvin’s Institutes for French). There also came the creation of free schools for children aimed at an education community and an overall concern for the well-being of the community and poor, “Luther, far in advance of his times, advocated state provision for its needy citizens…” (p181)

Finally in the realm of religion the Reformation served to bring God’s Word to the people through the dissemination of the biblical text. It further resulted in worship services in the language of the people, in the actual preaching of the Word, in an encouragement of family worship and a move towards spirituality within the home such that the home began to be emphasized as “the true field of instruction and the best school for the training of character.” (p184)

On the whole Stevenson offers an enjoyable and largely accurate presentation of the events leading up to and through the Reformation.

The weaknesses in Stevenson’s text stem from an over-idealization of the Reformation figures (as was common throughout most of the 20th century), and over-aggressiveness towards Catholicism (he makes no claim to objectivity), and a tendency to embellish and present apocryphal legends as borderline fact (though he does often qualify these). All of this means that one must read Stevenson’s text with dash of salt, realizing that he may be giving into the temptation to be a good storyteller and playing up his own side as the ultimate heroes of said story. In that way the title is appropriate, “The Story of the Reformation.” The book should be read as a largely accurate story, not as an attempt at objective fact (insofar as objectivity is ever possible).

–“The reforming movement achieved success because it came at a time when men’s hearts were stirred with deep religious yearnings, when all over Europe thoughtful men felt instinctively that there was something radically wrong with the church and that supreme efforts must be made to reform it.”-22

–“That glittering ideal of the Humanists – education, enlightenment – is insufficient in the things of the spirit. However highly men may be educated, human nature does not appreciably change, but remains the same in its greatness and littleness, in its hopes and aspirations, and in its ineradicable needs. Men shall not live by education alone. In the last resort not education but religion can nourish the human soul, not reason but faith, and not the works of man but only the grace of God. Humanism stops far short of satisfying the needs of the world, whether it be in the twentieth century or the sixteenth.”-26

–“Calvin is to be credited with two achievements, a book and a city. The book was his Institutes and the city was Geneva.”-76

–“In the Scottish reformation are to be found the germs of modern democracy, the first awakening in men’s minds of a conception that was later to be crystallized in unforgettable words, ‘that government of the people, by the people, and for the people, shall not perish from the earth.'”-176

–“The lodestar of the Reformation was neither economics nor even social amelioration, but religion first and last and all the time.”-178

-“It has been claimed that ‘if democracy was the child of the Reformation, it was a child born in the extreme old age of its parents.’ But late or early it was born. For one thing the Reformation brought into prominence the ordinary man.”-179

Similar to Stevenson’s over-idealization of the Reformation figures and over-aggressiveness towards Catholicism he also has a skewed vision of the medieval period standard to the early 20th century. Thus when surveying the foundations of the Reformation he notes that “Everywhere in the world new life was stirring, in every direction and department of life men were reaching forward – in all except one only, the church of Christ…. The real tragedy of the medieval church is that it failed to move with the times. All around was progress and enlightenment: here alone was obscurantism and stagnation.”(p15-16)

Stevenson seems to see little admirable in the medieval period, largely ignoring such things as the Northern Renaissance or even the Italian Renaissance, which can both to a large degree be seen the outworking of this exact stirring. This also greatly undervalues the worth of such movements as scholasticism and the monastic movements which planted the seeds of the later universities and served as storehouses of learning.

This sentiment also seems in direct contrast to Stevenson’s statement elsewhere that “The reforming movement achieved success because it came at a time when men’s hearts were stirred with deep religious yearnings, when all over Europe thoughtful men felt instinctively that there was something radically wrong with the church and that supreme efforts must be made to reform it.” Reading Stevenson one might assume that this mood had extremely short roots.

Perhaps the greatest sign of the times for Stevenson is where in reference to the invention of gunpowder Stevenson states: “By it more people could be killed more easily and more quickly – a wonderful advance in the history of civilization! Of course the men of that time were not so civilized as we are: they had no hydrogen bombs or guided missiles. But even primitive guns primed with gunpowder made a difference. Wars became possible between peoples and nations, and killing became more democratic.” (p13)