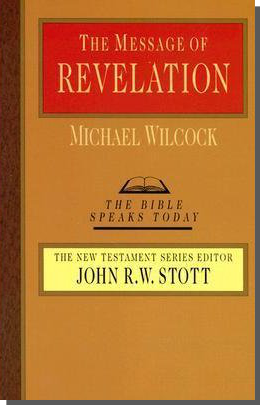 Michael Wilcock’s book The Message of Revelation is – as might be expected – a commentary on the book of Revelation. However, as the editors say in the preface ‘commentary’ is perhaps not the best word to describe the book. While it does offer a section-by-section analysis of the given book of the bible, the goal of this book is more to apply the text in a pastoral manner than to merely explain what it means. It’s goal is therefore to expound the text, relate it to contemporary life, and to do so in a readable, down-to-earth manner; to land somewhere between a commentary and a series of sermons.

It seeks above all to accessible to the average Christian and to apply the message of Revelation to the reader’s present needs. In this, I will say, it is successful.

As with most commentaries Wilcock begins with an introduction to the book of Revelation, discussing the style, context, interpretation, and use of the book. For Wilcock, Revelation is movement away from the more systematic theology of Paul into a the realm of what might for lack of a better word be called an educational picture-book designed to both refresh our spirit and educate our minds.

In approaching the book of Revelation, Wilcock works from the assumption that it is something that must be understandable and applicable to Christians as a whole: “Its chief value must therefore be of such a kind that Christians with no special academic resources can nevertheless appreciate it” (p30). Wilcock wants to make sure that the text is not treated as some sort of ivory tower mathematical puzzle: “This” he says “cannot be right. [Revelation] promises to yield its secrets to any humble Christian reader; the equipment he needs is not mathematical ingenuity, any more than it is specialized historical knowledge, but simply the Word and the Witness” (p60).

Perhaps the chief interpretation key for Wilcock – following the distinguished path of other commentators such as Leon Morris and William Hendrickson – is the repetition of patterns in Revelation:

“Pattern echoes throughout its length, as in an intricate poem. It positively rhymes… To repeat means to underline. And this is what God is going constantly. He has basically just one message for men, the good news of salvation. But in his concern to get it across, he knows that one statement of it will not be enough… The purpose of hitting the same nail several times it obvious: to drive it home… Those truths God outlines for [us] again and again, sometimes by a pencil sketch, sometimes by a more detailed pen drawing, sometimes by brushfulls of paint.” (p37, 39)

Throughout his commentary Wilcock continually returns to this theme of repetition. The final battle happens time and again, the world ends many times over. Seen through this lens Revelation becomes not a chronological series of events detailing a linear progression of what will happen at the end of time, but rather an ever-more-detailed highlighting of Christ’s victory on earth during his incarnation, of the current struggles faced by Christians, of the spiritual realities behind those struggles, and of the ultimate consummation of Christ’s kingdom at his second coming.

In doing this, Wilcock takes essentially a modified idealist approach to interpreting the book and arrives at an amillenial perspective. The events of Revelation are not at the end of history, rather “It is at the time of Christ’s incarnation that the downfall of Satan, and the coming of the kingdom of God and of the authority of Christ, takes place. From that time on, the people of the new Israel have been able to claim victory over the dragon, because of the Lamb’s death and their witness to their own experience of its power” (p121).

“The New Testament knows of only one parousia, and that is the ‘day of the Lord’ which will end all things. If this ‘end’ is described in chapter 19, then the thousand years described in chapter 20, even though they follow it in the book, must precede it in actual history; in a word, 20:1-6 is a flashback. The binding of Satan, the first resurrection, and the millennium are all metaphors for the present situation in this world, covering the period between the first and second comings of Christ.” (p179)

In that regard Wilcock’s is an excellent commentary from the amillenial perspective, and I can highly recommend it as such. It is straight-forward, readable, and lucid. At times Wilcock has minor interpretational differences from other amillenial commentators (such as Morris, Hendrickson, or Beale) but on the whole he handles the material excellently.

One area where Wilcock especially excels is in bringing out the heavenly as being the truly real in a similar manner to C.S. Lewis in The Great Divorce.

“‘Breadness’, the quality of ‘being bread’, belongs in its purest essence to Christ; it belongs to the loaf on the table only in a secondary, derived sense… once we free ourselves from the notion that the world we live in is the touchstone of reality, and that the truths of the spiritual world, being less palpable, are therefore less real, we can see that John is giving not explanations, but equivalents… The amillennialist must remember that the truths he claims to see beyond the metaphors are not vague spiritualizations, but demanding realities: not less, but more, solid than the stuff of his vision” (p155-156).

This insight, along with his continual demonstrations of Satan’s binding at the first coming of Christ, set Wilcock above many of the more technical commentators.

I would recommend this book both for Christians who are venturing into Revelation for the first time, for those familiar with Revelation who want an edifying refresher, or for pastors who want additional insights to aide them in their sermon writing. It is an excellent text all around.

-“The setting up of God’s kingdom has begun with the coming of Christ; and the promise that ‘it shall break in pieces the kingdoms and bring them to an end, and it shall stand for ever’ (Dn 2:44), is already starting to be fulfilled. The fulfillment is a process, not a criss; and a lengthy one, not a sudden one…”-33

-“‘God whispers to us in our pleasures, speaks in our conscience, but shouts in our pains.’ If we will not hear the tremendous voice of the pains of bereavement, there can be no hope for us.”-100

-“Having seen his perversion of human society confounded, Satan says, ‘If I can no longer pervert, I will destroy.’… But while Satan is saying, ‘I will destroy’, God is saying, ‘So you shall’. Satan’s purpose is to assert his power; God’s is to prosecute his justice. The result is the same: Armageddon.”-149

-“See what your commentator has to say about Revelation 20, and you will get a good idea of his approach to the rest.”-175

-“To recapitulate, we h ave the binding of Satan, then the thousand-year reign of the saints, then Satan’s last revolt and its defeat, then judgement and the elimination of all evil.”-176

-“When the old prophets looked on to the coming day of the Lord, they could not always distinguish between the distant peaks and the nearer hills.”-186

-“We know from the context that this story [of the binding of Satan in Matthew/Mark] was told expressly to illustrate something which happened to Satan, and which happened to him at the time of the incarnation. With Christ’s first coming, the kingdom of God had come, and he went about casting out evil spirits to demonstrate precisely this – that Satan, for all his strength, had been seized and bound.”-188

Apart from a few minor interpretational differences, my only real criticism of this book is at one point where Wilcock comments on the Trinitarian formula as presented in chapter one of Revelation (p34). Wilcock calls the order – Father, Spirit, Son – unusual and tries to explain why it might be different than the ‘normal’ order (Father, Son, Spirit).