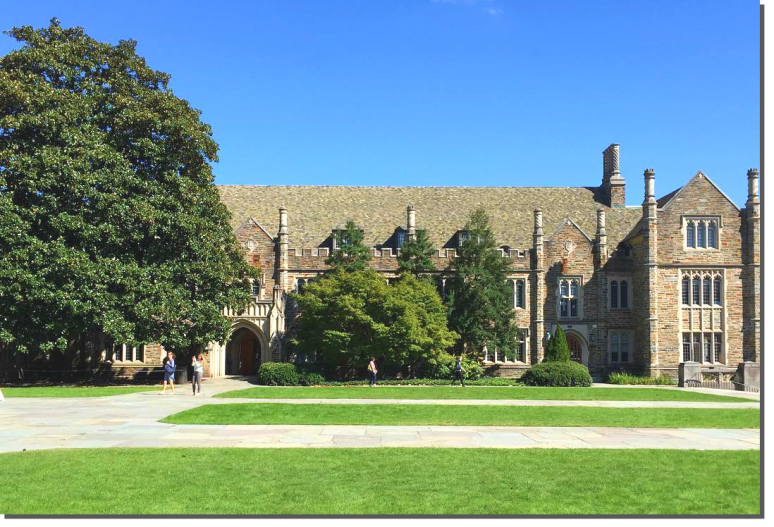 Elsewhere  the nature of a DMin was discussed, ending with the question of whether or not someone who has earned a DMin should be referred to as ‘Doctor’.

At a glance the obvious answer would be “well of course they should be called doctor, it’s right there in the degree: Doctor of Ministry.” For many, though, this is not an adequate response, mainly because it is seen as giving the DMin too much credit, as putting it on par with a PhD.

Others say that neither of those should really be called doctor, that we should reserve the term for those in the medical profession (think Tim Allen’s character in The Santa Clause not wanting Neil to be referred to as a doctor since he’s just a psychiatrist).

To begin to answer this question let’s first look at the history of the term doctor.

At its base definition, the term doctor historically refers to an eminent theologian declared a sound expounder of doctrine, or more generally to any learned or authoritative teacher. Etymologically, the word derives from the Latin verb docere ‘to teach’ (especially in reference to doctrine). It was first used by Cicero in his discussions of rhetoric and picked up by the early church to refer to the apostles, church fathers, and other authorities on the Bible (such as Augustine, Ambrose, and Jerome as doctor ecclesiae, ‘doctor of the church’).

If we are basing our conclusions on etymology, it is likely safe to say that the one who has achieved a DMin fits  into this definition.

Calvin in his Institutes picks up this language when he talks about the “orthodox doctors,” usually in reference to how the orthodox doctors defended against some heresy. Calvin seemingly expands it out to refer not only to the early church but to Christian teachers in all eras, noting how “in almost every age [Satan] has stirred up impious spirits to vex the orthodox doctors.” Throughout the Institutes Calvin uses the term as a basic synonym to “teachers in the Church” whether orthodox or not, even referring to the ancient Pharisees as ‘doctors of the law’ (Ch.XVIII).

If we are basing our conclusions on etymology, it is likely safe to say that the one who has achieved a DMin fits  into this definition. The one who has been granted a DMin is [ideally] a sound expositor of doctrine and a learned teacher in the church.

Etymology seems to provide a case, but there is also the question of academic rigor. One reason often given for not honoring DMins with the title of doctor is that the DMin is really just a fluff degree, ‘PhD Lite’, or a watered-down doctorate (as was noted elsewhere, the fact of the matter is that it’s just a different type of degree).

The question is then raised, how do a PhD and a DMin stack up against one another academically?

In answering this question let’s look at a case study, taking Westminster Theological Seminary and comparing the requirements for a DMin versus those of a PhD (assuming you did your entire academic tenure there beginning after undergraduate).

Below is a breakdown of what a student at WTS would  go through start to finish, based off an MAR leading up to the PhD and an MDiv to the DMin (note, this is a breakdown I put together based upon the information provided on the WTS website). 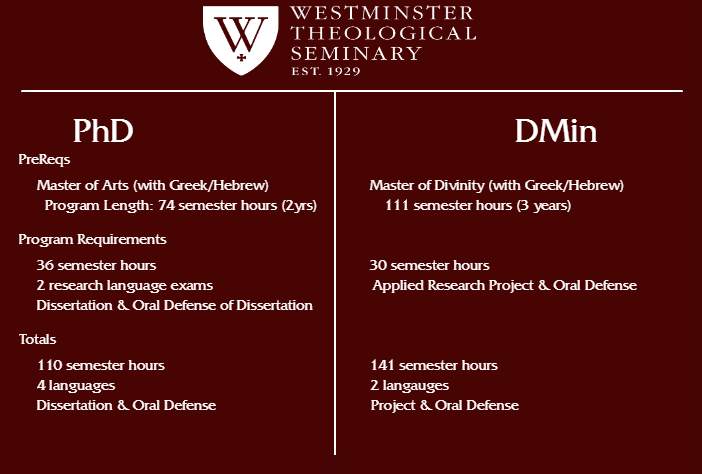 So how do they stack up?

The PhD is a longer program than a DMin, and also has a much more substantial final project in its dissertation as opposed to the applied research project of the DMin. On the flip side, in the end a DMin will have taken substantially more semester hours overall, and it would likely take an individual longer to get the MDiv/DMin. Most Master of Arts degrees are just over 30 semester hours, meaning the DMin will likely end up with almost an entire graduate degree worth of hours over the PhD.

That is all merely to say, the PhD is no doubt more intense than a DMin, but the amount of coursework required to achieve a DMin is quite substantial.

Note: We might also point out here that it is not accurate to compare the DMin to something like a Juris Doctor (which is a master’s level degree). A more apt comparison would be between someone in the medical field getting an M.D. versus a PhD in medicine.

Basing this case study at Westminster also gives the PhD an even higher boost. The average graduate-level degree is closer to 30-36 semester hours. In general, most PhD students will have earned a standard master degree with no Greek or Hebrew, topping their program out at 72 semester hours and 2 languages, compared to the DMin requiring well over 100 semester hours of coursework regardless.

This means that it is perfectly possible – and indeed, likely – to have a PhD who has completed about half as many semester hours as a DMin.

This doesn’t take into account that many PhD programs can be entered without a Master’s degree , widening this gap even further. For those programs, one could have a 36 hr, 2 language PhD contrasting a 141 hr, 2 language DMin.

Given all of this, is it appropriate to refer to a DMin as doctor?

In my opinion, yes, based both on the historic usage of the term and on the amount of coursework put into earning the degree. By the time someone has finished a DMin they should certainly qualify as a sound expositor of doctrine and a learned teacher in the church, and they will have done much more bare coursework than the average PhD.

Finally it should be noted that much of this is dependent upon the specific programs on either side. Some PhDs don’t require a Masters (though some award a Masters in the process), and some MDivs and some DMins may well require less than what was charted above – WTS was given as an example of one of the more rigorous programs. This would mean that the amount of work in either instance is dependent in large on the specific institution and the specific individual. It can work out that a DMin has done substantially more work than a PhD, but it can often work out the opposite.

That said, what should be avoided – and the thing that many objectors have a problem with – is the desire to be called doctor; that is, a minister who insists that those around them refer to them as a ‘doctor’ or who introduce themselves as such. There is a temptation towards pride that must be guarded against (though the same can be said of the PhD).

It as accurate to refer to a DMin as ‘doctor’, though whether it is prudent is perhaps a matter of circumstance, and we can probably agree that anybody who mandates that they be referred to in that manner is a prig.

2 thoughts on “Should a D.Min be called ‘Doctor’?”