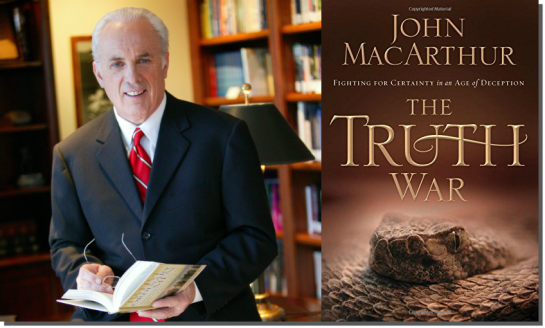 The Truth War is John MacArthur’s account and call-to-arms against what he claims to be the most pressing pitfalls in contemporary theology, specifically, postmodernism and the arrival of the emergent church. Most pointedly it addresses the issue of truth and what we can know concerning scripture, as well as delving into just what it is that is causing so much trouble in today’s churches.

MacArthur begins his book with an expounding of just what it is that ‘truth’ means, how it relates to Christianity, and how it relates to the context of culture. Naturally MacArthur takes a very strong stance on truth, as opposed to the “rejection of every expression of certainty” that he identifies with the postmodern movement. This done he then goes on to explain just how it is that contemporary theology got to the place that it is, giving a brief overview of the progression of philosophers and finally arriving at a critique of those present ‘theologians’ who align themselves with the emergent church, especially Brian McLaren (who is seen as one of the chief leaders of the movement).

The overall theme of the book is one of the need to contend for the faith, to defend the truth, and to assert the truth of Christian doctrine rather than abandoning the hard truths in favor of appealing to the culture and society at large.

It is about exercising Biblical discernment and refusing to give into those who sacrifice truth in order to gain acceptance. The postmodern calls the Christian arrogant for asserting the ability to know any truth with any certainty, instead raising up an idol of uncertainty and ambiguity, removing from Christianity anything that defines it as being separate from the world or even as a religion distinct in itself – preferring to acclimate wherever possible. Since no doctrinal truth can be asserted in these contexts the ‘believer’ (if they can still be called that) is simply encouraged to live the Christian life. A call to salvation and repentance of sins is out the window and yet another works-righteousness heresy is lifted up in its place.

MacArthur presents a call to truth in contemporary churches, especially those who would call themselves evangelical and yet show no discernment in “rightly dividing the word of truth,” but simply roll with the fads. In being just over 200 pages it’s a moderately short, easy read, and gives a good view of the way those in the church see the emergent church movement and why they feel so strongly the need to struggle against it. The goal is not only to enlighten the reader as to the struggle, but to engage them in it, not in arrogance or harshness, but in order to defend the truth of Christ, lest his gospel be stripped of it’s message in favor of yet another form of works-righteousness (at least theoretically, more on that below).

– “Truth never changes with the time, but heresy always does.”

– “The belief that no one can really know anything for certain is emerging as virtually the one dogma postmodernists will tolerate. Uncertainty is the new truth. Doubt and skepticism have been canonized as a form of humility. Right and wrong have been redefined in terms of subjective feelings and personal perspectives.”

– “The most compelling question in the minds and on the lips of many pastors today is not “What’s true?” but rather “What works?” Evangelicals these days care less about theology than they do about methodology. Truth has taken a backseat to more pragmatic concerns”

– “Christians ought to have learned by now that we cannot avoid being an offense to the world and still remain faithful to the gospel. The gospel is inherently offensive. Christ Himself is offensive to all who reject the truth.”

My first few criticisms have less to do with MacArthur’s message and more to do with his presentation. For example while the book is moderately short there are various chapters which could quite simply be removed without the book actually losing anything. At one point MacArthur spends numerous pages discussing the book of Jude, who Jude was, the significance of his name and how it’s translated, and the in’s and out’s of what it is that is going on with Jude that prompted his book. Now, while all this is a good and well and is nice to know, it really doesn’t do much in advancing the theme of the book.

A similar area which I feel doesn’t do much to advance the books theme is a near chapter-long summary of various early heresies and their histories in the church, specifically Sabellianism and Arianism. While this is all good information in understanding the history of the church and the history of heresy, and why we should fight it, it seems that the same effect could have been accomplished in just a few paragraphs, rather than repeating oneself for pages on end.

The last criticism in this vein is that while there are these two areas which seem side-tangents from the main theme stuck in the middle of the book, the ‘Appendix’ is one of the best chapters in the book and is regulated to being jumbled in after the conclusion. Personally, I’d have much rather had the sections found in the appendix dispersed relevantly throughout the rest of the text.

Moving on from that, another area which MacArthur may hurt his message is in his harshness; despite his repetitions that the Christian should act gentleness he has a tendency to blast his opposition. This goes along with another criticism, which is his focus on only a few of the emergent church thinkers such as Brian McLaren (with brief mentions of Rob Bell and a few others). I’ve seen this particular facet of the text criticized as bifurcation between orthodoxy and the most radical of the postmoderns (given that there are not only lesser degrees but also diverse types). MacArthur would do better to focus less on individuals and more on the movement as a whole; it’s easy to find a few cringe-worthy individuals in any movement.

My last, and probably biggest complaint with the book is that I don’t think MacArthur has much of an understanding of the philosophical underpinnings of postmodern thought.

One might argue that he is immune to this criticism because of the fact that he is primarily addressing postmodern theology itself and the things which go along with it, rather than the philosophical root of the matter – ie, he’s addressing the problems that it creates in the church, not necessarily the worldview as a whole. This is similar to treating the symptoms rather than illness.

While he does make a few good points against the emergent church and does give a good [albeit extremely superficial] understanding of postmodern theology, I think if he were wanting to write an actual apologetic against it he would do better to attack the root, demonstrating how emergent church theology is ultimately drawn from these faulty premises. If he attacks only the manifestations in theology his opponents can simply disagree with him, for he hasn’t done anything to shake their worldview – if he cuts their root, even if he doesn’t defeat them he’ll at least force them to enter the discussion.

Granted, this entire criticism could be set aside on the argument that that isn’t the audience MacArthur is addressing, that he just wants to give the general populace sufficient reason to reject emergent theology. Personally, I think he could have done both.

Regardless, one gets the impression in reading MacArthur that the only information he has about postmodernism is what he has read from its critics. That may be enough information if your only interest is preaching to the choir, but it fails in the sphere of offering any substantial engagement.