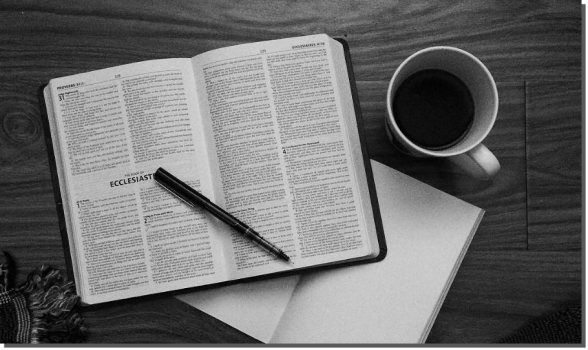 The ancient world was one filled with myths and stories of all types, stories about gods and about prophets and oracles who spoke with those gods. In secular society the Bible is often seen as just another one of these ancient myths.

The Bible is not just another myth, but it is in the context of these myths that the Bible was written. They provide the background against which we are to interpret the text; it was often these sorts of myths which the Biblical narrative was responding to. Thus, it is important for Christians to analyze the Scriptures in light of their ancient Near Eastern literary and cultural contexts.

So just what are the similarities and differences were between the Scriptures and those other myths which seem to bear some resemblance to it? It is by answering this question that we may determine whether or not the Bible is indeed unique in its content.

Given that creation myths begin in the beginning, comparing the creation myths is one of the better places to start. One such text that the Scriptures might be compared to is the Enuma Elish, and one of the most immediately striking differences is the manner in which the myths are told.

One of the disti
nctiveness about ancient Near Eastern creation accounts is that they are told in a distinctly mythic manner. In contrast, the creation account in Genesis gives its account in a highly historical, concise and matter-of-fact manner.

Thus we can see the Enuma Elish begin with:

When in the height heaven was not named,
And the earth beneath did not yet bear a name,
And the primeval Apsu, who begat them,
And chaos, Tiamut, the mother of them both
Their waters were mingled together,
And no field was formed, no marsh was to be seen;
When of the gods none had been called into being,
And none bore a name, and no destinies were ordained;
Then were created the gods in the midst of heaven,
Lahmu and Lahamu were called into being…
Ages increased,…
Then Ansar and Kisar were created, and over them….
Long were the days, then there came forth…..
Anu, their son,…
Ansar and Anu…
And the god Anu…
Nudimmud, whom his fathers, his begetters…..
Abounding in all wisdom,…’
He was exceeding strong…
He had no rival –
Thus were established and were… the great gods.

These primeval gods eventually start fighting one another, monsters, dragons, scorpion-men, fish-men, and all sorts join the mix. All sorts of shenanigans ensue, Marduk eventually arises and Tiamut is killed. Marduk then fashions the heavens and the earth out of her body:

Then [Marduk] rested, gazing upon [Tiamut’s] dead body,
While he divided the flesh of the … , and devised a cunning plan.
He split her up like a flat fish into two halves;
One half of her he stablished as a covering for heaven.
He fixed a bolt, he stationed a watchman,
And bade them not to let her waters come forth.
He passed through the heavens, he surveyed the regions thereof,
And over against the Deep he set the dwelling of Nudimmud.
And the lord measured the structure of the Deep,
And he founded E-sara, a mansion like unto it.
The mansion E-sara which he created as heaven,
He caused Anu, Bel, and Ea in their districts to inhabit.

In all this it takes about six chapters just to get to the creation of the world.

In contrast to this we have the creation of the world in Genesis: “In the beginning, God created the heavens and the earth.”

That’s it. God simply does it. No great battles, no wrangling of primordial forces, no monsters. God simply makes it happen. Along the same lines, there is nothing before God in Genesis. He doesn’t use pre-existing material, he does his work ex nihilo.

Genesis is simply concerned with the fact that creation came into being and that God is the one who did it. 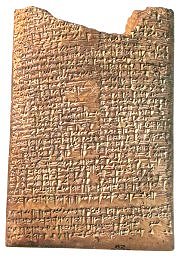 “My blood will I take and bone will I fashion
I will make man, that man may
I will create man who shall inhabit the earth,
That the service of the gods may be established, and that their shrines may be built.
But I will alter the ways of the gods, and I will change their paths;
Together shall they be oppressed and unto evil shall they….

Contrast this with Genesis:

Then God said, “Let us make man in our image, after our likeness. And let them have dominion over the fish of the sea and over the birds of the heavens and over the livestock and over all the earth and over every creeping thing that creeps on the earth.”

So God created man in his own image, in the image of God he created him; male and female he created them.

And God blessed them. And God said to them,“Be fruitful and multiply and fill the earth and subdue it, and have dominion over the fish of the sea and over the birds of the heavens and over every living thing that moves on the earth.”

In ancient Near Eastern myth, man is created out of the substance of a god as a slave to be oppressed. In contrast, Genesis has man made in the image of God, and he is made with dignity. He is made to have dominion, to multiply and subdue the earth.

Thus the second contrast with see is that in Scripture, man is made with dignity for noble ends.

While the Bible may bare similarities to other texts these similarities prove to be mostly superficial due to being attempts at answering the same questions about the universe. While the religious literature of other groups in the region revolve around elaborate mythologies and religious sayings – or aphorisms – the literature of the bible is primarily revelational and historical, and indeed it is revelational through its history, for God has communicated himself in the history of a nation, namely that of the Hebrew peoples.

The historical aspect of Scripture reveals the way that God interacts with humanity in history.

Along with having differing creation accounts and differing views of revelation and prophecy, the Bible also differs in its morality. One of the premier examples of this can be seen in the relation between the Proverbs and the writings of Amenemope, whose ethical teachings closely parallel one another.

Either way the Biblical text is not put in jeopardy, especially when one realizes that the underlying nature of Scripture is time and again vastly different than that of its counterparts. The chief reason for this is that Scripture presupposes the Christian God, which is something that no other myth or system of ethics can boast.

That is, the motives for writing these instructions are radically different.

Thus when we read the writings of Amenemope we find that he simply offers good guidance, his goal is for his reader to prosper, and so he begins:

Give your years and hear what is said,

Give your mind over to their interpretation:
It is profitable to put them in your heart,
But woe to him that neglects them!
Let them rest in the shrine of your insides
That they may act as a lock in your heart;
Now when there comes a storm of words,
They will be a mooring post on your tongue.
If you spend a lifetime with these things in your heart,
You will find it good fortune;
You will discover my words to be a treasure house of life,
And your body will flourish upon earth.

You should listen to him because it is profitable and you will find good fortune. The goal is simply to give good advice that will help you along your way.

In contrast to this we have the Proverbs:

The proverbs of Solomon, son of David, king of Israel:
To know wisdom and instruction,
to understand words of insight,
to receive instruction in wise dealing,
in righteousness, justice, and equity;
to give prudence to the simple,
knowledge and discretion to the youth—
Let the wise hear and increase in learning,
and the one who understands obtain guidance,
to understand a proverb and a saying,
the words of the wise and their griddles.
The fear of the Lord is the beginning of knowledge;
fools despise wisdom and instruction.

Or as he says later in chapter 22:

That your trust may be in the Lord,
I have made them known to you today, even to you.

The goal of the Proverbs is not simply to provide good advice, its advice has a goal. This goal is not merely that you would prosper, but “That your trust may be in the Lord.”

The Lord under-girds the wisdom given in the Proverbs. The boundary stone is not moved because “their Redeemer is strong; he will plead their cause against you.”

It is not simply that you shouldn’t, but you shouldn’t do it because there is a transcendent God who is your standard and will hold you accountable.

Again one observes a vastly different foundation between the Bible and its contemporaries.

With this in mind, another area in which one might compare the Bible to its contemporaries is in the realm of prophecy and revelation. While the Bible is not alone in putting forth prophecy, it is clear that the other sorts of prophecy which abounded in the ancient world are in no way like those of Scripture.

One of the chief differences is that the prophecy of Scripture alone has a moral imperative with a direct relation to God. In contrast to this, pagan prophecy is more akin to guessing an effect from a causal relationship, and is therefore much more mechanical than Biblical prophecy.

Finally, pagan ‘prophecy’ seems to have been written after the fact, which would seem to disqualify it from being any sort of real prophecy.

It is the prophecy of Scripture alone with confronts the idolatry, immorality, and injustice of the people of God, presenting them with a moral imperative and a road either to or away from God.

This is in contrast to pagan prophecy trying to guess causal relationship and necessary relations. Yet the greatest division between Biblical prophecy and that of the pagan nations comes in its reality, in its actual ability to foresee and foreshadow the future.

Whereas pagan ‘prophecy’ seems written after the fact, the Biblical prophecy foreshadows real events, whether this be Jeremiah speaking of Babylon devastating Judah, Haggai foretelling the return of the Davidic line or Zechariah foretelling that the Messiah will be killed, the Bible prophecy and the revelation of God rings true.

Perhaps the most important lesson to be learned from the cultural and literary contexts is the God is unique in the way he does things, and that the Word of God is unique from anything else that man might develop, for doesn’t act in a way that might be anticipated.

He doesn’t tell the story of the creation like men would, hence the vast difference between Genesis and all other creation accounts; nor does he give a morality just for the sake of horizontal relations between people; nor does he give the gift of prophecy and the light of revelation purely for the good of pedigree of mankind.

Everything he presents is centered around himself, not around man, and yet man is dignified – all men, for they are made in his image.

The Bible is unique.