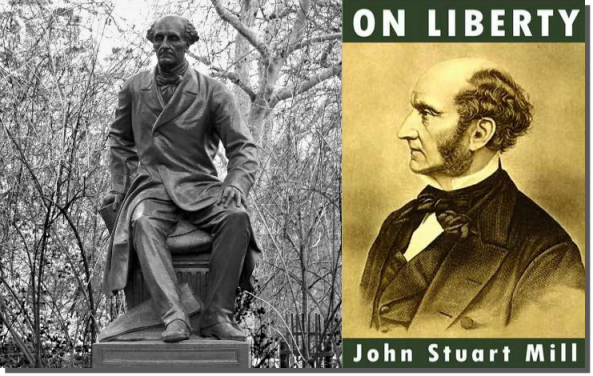 As stated by Mill the topic of On Liberty is the role society should take in interfering with the liberty of an individual, that is, the amount of power that society may legitimately exercise over its people.

The sphere of Mill’s inquiry is the system of a democracy, where the main danger to individual liberty is that of the “tyranny of the majority,” in which minorities are subjected to the whims of the majority such that the “weaker members of the community” are “preyed upon by innumerable vultures.” Mill’s argument is that “self-government” is not “the government of each by himself, but of each by all the rest.”

Mill’s main thesis is that society and the governing bodies have no right to interfere with the liberty of thought, action or individuality in any person save when those liberties may cause harm to others; that “over himself, over his own body and mind, the individual is sovereign.” This is to say that society is unable able to interfere with individuals unless they’re harming somebody, not including themselves – a person has every right to do harm to themselves and society may not intervene simply for the good of the individual.

Apart from this, Mill also believes that keeping away the “tyranny of the majority” is good not only for the individuals and the minorities, but for society itself as well; that the argumentation/discussion which leads from freedom of thought is pivotal in the development of the society and truth. It is only in this that societies can avoid stagnation and people can truly learn; they must be able to see both sides of the argument (from people who truly believe them) and the ideas must be allowed to clash, thus, “genius can only breathe freely in an atmosphere of freedom.”

In arguing for freedom of expression Mill argues that because the opinions of the individual may be true (or at least contain some portion of truth) and because human fallibility makes it so there are none fit to judge whether the opinion is true anyway, full freedom must be granted; not only this, but because there are none fit to judge, [according to Mill] there is no absolute certainty.

This is all to lead into a sort of Hegelian system which Mill puts forth, noting that both sides of any argument generally only contain a portion of the truth and that it is only by bringing these two ideas together that the full truth can be found; a balance must be found between the ideas. The ideas must clash and in this clashing the synthesis between them will be found.

Overall Mill’s text is a good read even for people today. The ideas being presented are just as relevant now as they were during Mill’s time, such the fact that the voice of third parties is all but crushed in the U.S.’s two party system or the discussions over gay marriage, abortion, or even something as small as free speech zones on college campuses. All of these feed back into the issue being discussed by Mill, that is, how much power society should be able to wield over its members and just what is the nature and extent of our liberty.

-“The liberty of the individual must be thus far limited; he must not make himself a nuisance to other people.”

-“He who knows only his own side of the case knows little of that.”

-“What was not wanted was that the rulers should be identified with the people, that their interests and will should be the interest and will of the nation. The nation did not need to be protected against its own will There was no fear of tyrannizing over itself.”

From a secular standpoint I’m not sure how much can be critiqued of Mill’s ideas. From a Christian standpoint there are two chief issues which may be taken.

The first issue that may be taken is with the idea that ‘over himself the individual is sovereign.’ This is exactly the mindset which Scripture rails against and sets up as the original sin, to think that we are our own sovereigns, to usurp the sovereignty of God over his creations.

The second issue which may be taken is with lack of any solid judge for truth. Simply put, the Christian would argue that God is the standard against which we measure truth, and due to his immutability he stands as a very good standard by which to judge. There is still the factor of fallibility which Mill notes, however this is not to say that truth cannot be discovered or that no statements can be set as entirely false.