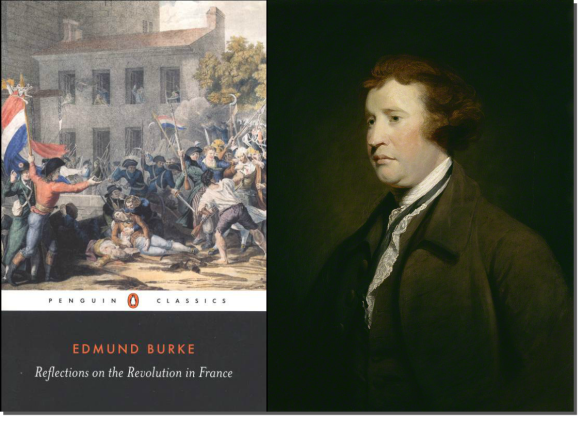 During the late 18th Century the nation of France underwent a time of turmoil which is now known as the French Revolution. Many thinkers of the time gave their support to this revolution; one such thinker was Richard Price.

Edmund Burke‘s Reflections on the Revolution in France is written as a rebuttal to Price, as a defense of the English system of government, and in opposition to the ideas and practices of the French Revolution – whereas the supporters of the French Revolution believed in legitimacy through election Burke maintained support of monarchy, speaking out against those who base politics upon metaphysics and use abstract rights as a basis for political theory.

Burke’s basis for these positions lies in the thought that abstracts are incapable of accounting for all the nuances which are present in the political process, that what works in government is too circumstantial and subject to change for the ideals proposed by the theorists. Because of the way in which liberties change with time these liberties cannot be discovered and founded through abstract rules and doing so guarantees that a government basing its authority in these rights will not be sure of continuance.

Not only does Burke believe that politics are too nuanced for abstract principles to do them justice but he also argues that these metaphysical pursuits result in a certain moral blindness in which plots, massacres and assassinations become trivial matters, simply means to an end (thus accounting for the violence of the French Revolutions) – he designates this as a loss of chivalry by which France has lost its loveliness and thereby the desire to love it. Even more than moral blindness and a loss of chivalry Burke argues that popular rule creates an assembly of unqualified people, putting in power men that “never had seen the state so much as in a picture” and know nothing of the world or governing.

Burke alternative to all this is tradition, legitimizing government through those systems which are time tested and have been filtered through generations. For him it is only in those traditions that have been instituted by the forefathers and made sturdy over time that the government can be truly legitimized. As he says “people will not look forward to posterity, who never look backward to their ancestors.”

If nothing else this treatise by Burke is an interesting look back into the mindset of the past, even more an interesting look into the philosophic progression which took Western civilization from a primarily monarchical system of rule to the representative systems of today. While in retrospect it may be easy to dismiss much of Burke’s thought he does manage to offer a compelling case for the authority of tradition.

-“The effect of liberty to individuals is that they may do what they please; we ought to see what it will please them to do, before we risk congratulations which may soon be turned into complaints.”

-“On this [abstract] scheme of things, a king is but a man, a queen is but a woman; a woman is but an animal, and an animal not of the highest order.”

-“There ought to be a system of manners in every nation which a well-informed mind would be disposed to relish. To make us love our country, our country ought to be lovely.”

-“I thought ten thousand swords must have leaped from their scabbards to avenge even a look that threatened [the Queen of France] with insult. But that age of chivalry is gone. That of sophisters, economists; and calculators has succeeded; and the glory of Europe is extinguished forever. Never, never more shall we behold that generous loyalty to rank and sex, that proud submission, that dignified obedience, that subordination of the heart which kept alive, even in servitude itself, the spirit of exalted freedom. The unbought grace of life, the cheap defense of nations, the nurse of many sentiment and heroic enterprise, is gone!”

One point which may be brought up against Burke’s line of thought (though not against Burke himself, since the institution of democracy was too young for him to know any better) is the point that election does allow for professional politicians in similarity to the professional aristocrats which Burke admires.

An even greater point which may be brought up is that Burke is essentially begging the question in regards to governments versus abstract rights. He argues that politics are too subject to change to be based on stagnant abstract rights, yet he never actually makes it a point that politics must of necessity be this way. Somebody arguing against Burke only need point out that perhaps the reason they changed so much is because they had no solid basis other than tradition on which to rest; perhaps, if based upon something unchanging such as abstract rights, the issue of the changing nature of politics would be no more.