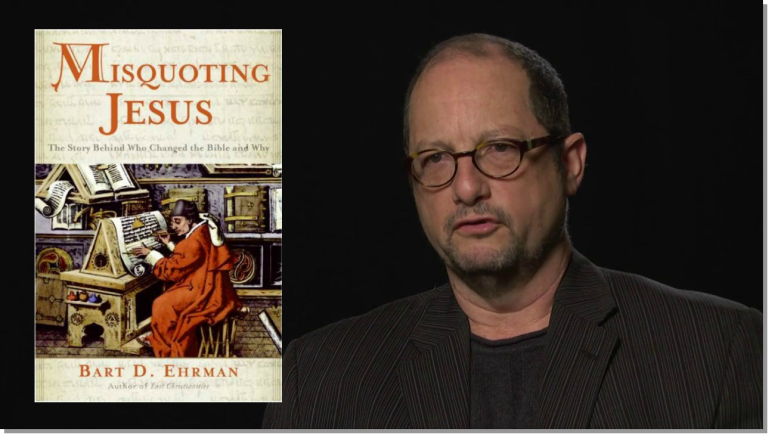 isquoting Jesus is author Bart Ehrman‘s account of the origins of the Christian New Testament, specifically as involves the transmission of the text and the formation of the canon. While Ehrman claims to have originally had a strong belief in the Christian faith, as he dove deeper into the text this faith faltered, till he found himself as an agnostic due to not feeling he was able to trust the words of Scripture as reliable. This book is an attempt to detail his reasons why the Scriptures that we have today cannot be seen as transmitting the truth.

Perhaps the quote which best sums up Ehrman’s argument against the canon is one which asks “… how does it help us to say that the Bible is the inerrant word of God if in fact we don’t have the words that God inerrantly inspired, but only the words copied by the scribes – sometimes correctly but sometimes (many times) incorrectly. What good is it to say that the autographs (i.e., the originals) were inspired? We don’t have the originals! We have only error-ridden copies, and the vast majority of these are centuries removed from the originals and different from them, evidently, in thousands of ways” (p.7). This is Ehrman’s argument, that due to errors made by scribes – either unintentionally or deliberately to push some agenda – that the New Testament texts are unreliable accounts of whatever was originally written.

Ehrman makes his argument by appealing to grammatical errors made by scribes, to changes made to the original text (such as the long ending of Mark or the story of the woman at the well), and to the idea that rather than having been seen as authoritative from the get-go, those texts which made it into the New Testament were simply the “one group eventually ‘won out’ in these debates” (p.153).

In essence, Ehrman’s text revolves around subtly putting forth a handful of presuppositions which exclude the authority of the text, and then barraging the reader with numbers and overplaying the significance of changes to make it appear that the changes he is pointing out actually matter on the grander scale. In fact, they don’t. As Ehrman himself says in another of his books “In spite of the remarkable differences among our manuscripts, scholars are convinced that we can reconstruct the oldest form of the words of the New Testament with reasonable (though not 100 percent) accuracy” (Lost Christianities, p.221), which is echoed by scholar Timothy Jones when he makes the statement [in reference to Ehrman’s ‘changes’] that “In each of these cases, however, it’s possible to look at the manuscripts and recover the original wording” (Misquoting Truth, p.71).

The problem for Ehrman is that he is purely a product of his time, and is trying to interpret the Bible through the lens of Enlightenment modernism – that is, rationalism, a system that insists on 100% certainty (either through reason or science) for any truth claim. This rationalism is a philosophy which was dominant throughout the Enlightenment into the early 20th Century, and – while Ehrman ascribed to Christianity early on – the type of Christianity he was brought up in was also one swamped in this philosophy (that is, fundamentalism). Both are systems which want absolute certainty, just the bare facts, no interpretation, etc. The problem is, these things are simply impossible, regardless of the field of study. In the words of Nicholas Perrin “History cannot prove anything” and “To observe is to interpret” (Lost in Transmission, p.93, p.10). Ehrman wants to have proofs for believing the Bible, but this sort of rationalism is inapplicable.

When Ehrman finds that rationalism fails – as it does inevitably in any field it is applied – he ends in despair (that is, he follows the typical route from modernism to postmodernism) and embraces relativism. Thus he argues that orthodoxy were merely the winners, and that ‘heretics’ were just as much Christians as the rest; i.e. “Eventually, some of these Christian books came to be seen not only as worthy of reading but as absolutely authoritative for the beliefs of Christians. They became Scripture” (p.29). In order to do so he blatantly ignores biblical evidence to the contrary (such as 2 Peter 3:15-16 or 1 Timothy 5:18), or the many places Paul condemns those who change the gospel presented to them, and makes up his own story.

There are a few good portions of this book. It does enlighten one to the problems of textual criticism, and helps one understand the way in which the Bible came into its current form. It even is helpful – and truthful – in the way it handles some of the texts which were added into the Scriptures.

Yet, overall, Ehrman is skewing the facts in order to push his agenda that the Bible is unreliable; an agenda not founded upon the evidence, but upon a false adherence to rationalism (even when it fails). Not only this, but even if every example that Ehrman gives were to be taken at face value, it still wouldn’t matter, the chief reason being that none of the changes he notes actually change any central tenant of Christianity, or even a minor one. The doctrines found in the changed areas are all born out elsewhere in Scripture, so even if one were to remove all the changed areas, Christianity would remain the same. Thus, the worst part about the book is that it is an irrelevance playing at importance. It is, in a word, sensationalism.

– “This oldest form of the text is no doubt closely (very closely) related to what the author originally wrote, and so it is the basis for out interpretation of his teaching.”-62

– “The reading that best explains the existence of the others is more likely to be original.”-132

– “The King James Version is filled with places in which the translators rendered a Greek text derived ultimately from Erasmus’ edition, which was based on a single twelfth-century manuscript that is one of the worst of the manuscripts that we now have available to us!”-209

One minor nitpick is Ehrman’s statement that “By this period it was widely believed among pagans that the gods were not subject to the petty emotions and whims of mere mortals, that they were, in fact, above such things” (p.201) He doesn’t offer any citation for this statement, furthermore, the entire point of the Platonic dialogue Euthyphro is that the gods are petty, and therefore piety can’t be based upon ‘what is dear to the gods’. Then again, perhaps Ehrman is aware of a source documenting a change from Plato’s stance.

May or may not be a Time Lord